Tell Our Senators: Say NO to Gorsuch on the Supreme Court

Action You Can Take Today:  Call our Senators and let them know you support opposing Neil Gorsuch's appointment to the Supreme Court. 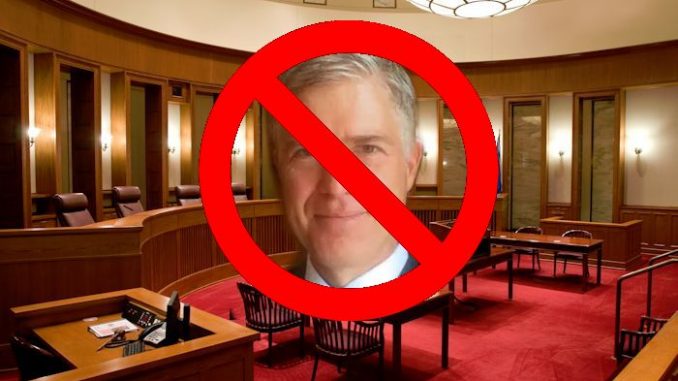 Donald Trump nominated Neil Gorsuch to fill the vacant seat on the United States Supreme Court. Judge Gorsuch does not belong on the Supreme Court—and not just because Republicans stole this seat by refusing to hold a hearing (let alone a vote!) for Merrick Garland, President Obama’s supremely well qualified and moderate nominee. Judge Gorsuch is a staunch conservative out of step with the American people.

Decisions Senators make today about who to put on the Court and how Supreme Court appointments are made will affect our democratic system for decades to come. The Supreme Court will continue to hear cases on critical issues, from protecting minority rights to ensuring free, fair, and democratic elections. And political games Republicans may play would threaten the dignity, impartiality, and legitimacy of the Supreme Court. Senators who oppose Judge Gorsuch’s nomination, or are wavering, need our support and encouragement to demand a more moderate, consensus pick. And senators who support Gorsuch need to hear that their constituents will not tolerate short-sighted power grabs that undermine the Court in the long run.

Our Senators, Chuck Schumer and Kirsten Gillbrand, have said they will oppose Gorsuch's appointment. Let’s help them stay committed to that choice and applaud their actions on our behalf.

Neil Gorsuch has routinely put the interests of employers, institutions, and big business ahead of average Americans. When a company fired a trucker for leaving his cargo to seek help in subzero temperatures—after the man waited long enough for his torso to go numb—Judge Gorsuch sided with the company. When a professor recovering from cancer was fired after requesting a short period of telecommuting to protect her fragile health from a flu epidemic on campus, Judge Gorsuch concluded that her modest request imposed an unfair demand that her employer provide a “safety net.” He also wants to judges to have greater liberty  to substitute their own uninformed views for those of scientists, economists, and other technical experts who spent years meticulously crafting data-driven rules to protect our air, water, health, and safety. He’s no champion of free and fair government, either: he has been unwilling to stand up publicly against Donald Trump’s vicious attacks on federal judges and supports an extreme view that common sense restrictions on campaign contributions should be struck down unless they satisfy “strict scrutiny”--the most difficult test the Supreme Court applies, and the same one used to protect our most sacred, fundamental rights.

In what is probably Judge Gorsuch’s most famous case, he conjured up the new theory that for-profit corporations have a right to religious freedom. This right had traditionally been reserved for individuals, houses of worship, and other religious non-profits, and Judge Gorsuch’s philosophy theory radically expands on the fiction that big businesses are people with rights as important—or even more important—than actual people. Judge Gorsuch believes that business should be able to impose their religious beliefs on their employees—even when doing so means depriving those employees of basic health care—and they should be able to use their “religious beliefs” to avoid the laws that protect the rest of us. But it’s not clear whether his expansive view of religious freedom extends beyond big business to protect, for example, Muslims’ constitutional right to an equal place in our society.

Senate Republicans have already been playing games with the Supreme Court for over a year. They only have a seat to fill today because of their unprecedented obstruction and breach of protocol last year. And those same Republicans, who used Senate procedures to block fair consideration of Merrick Garland, threaten to change the Senate rules to silence Democrats, unless Democrats rubber stamp thee far-right, anti-worker, anti-women friend of big business and big donors they have picked for the Court. Specifically, there is talk that Republicans will resort to the “nuclear option” of scrapping the filibuster for Supreme Court nominations. With the centuries-old filibuster, any nominee requires support of 60 of our 100 senators, which nearly always means a nominee must have support from at least some senators on either side of the aisle. Without it, bare partisan preferences could select the next justice and all who follow.