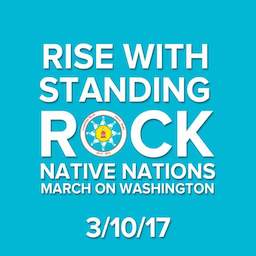 The Standing Rock Sioux Tribe and Indigenous grassroots leaders call on all allies across the United States and around the world to peacefully March on Washington DC. They ask that you rise in solidarity with the Indigenous peoples of the world whose rights protect Unci Maka (Grandmother Earth) for the future generations of all.

Standing Rock and Native Nations will lead a march in prayer and action in Washington D.C. on March 10th 2017.

For those who cannot march with them, they ask that we take peaceful action at home in our tribal nations, states, cities, towns, villages and provinces.

The March is being organized by the Native Nations Rise Planning Committee.